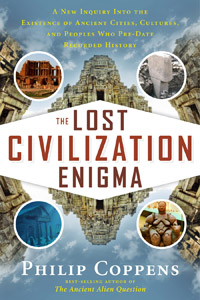 visit the store   Is history as the history books teach us?
by Philip Coppens   Or is civilization – when Mankind began to cultivate plants, work metals, build monuments and live in organized settlements – far more complex and older than we assume? As a ten year old child in school, my teacher taught that Greece was the cradle of civilization, even though in 1981, it was clear that this was no longer the case: Egypt and Sumer were known to be far older civilizations, but somehow the text books used in Belgian schools had not caught up with “facts”. Thirty years on, the situation has somewhat changed, but the criticism leveled at “text book historians” remains: there reigns a paradigm that even though we no longer believe that the world was created in 4004 BC, we still assume that civilization could not possibly have existed before. Before 4000 BC, it is widely assumed, our ancestors were pretty much savages. That is simply not the case. The latest archaeological findings have pushed the boundaries of civilization much further back, to 10,000 BC, with sites such as Jericho and, most recently, Gobekli Tepe in Turkey. The existence of Jericho and Catal Huyuk has been known for decades, has been dated to 8,000 BC, but I challenge you to open your child’s schoolbooks or any popular book on archaeology and find any reference to these cities in there. The few archaeological publications that do, treat these sites as stand-alone pockets of civilization, even though they are all situated within hundreds of miles of each other. The obvious answer seems to be that they were part of one culture, but no such argument is explored by scientists. When it comes to truly “lost” civilizations, like the lost civilization of Atlantis, historians even ridicule anyone considering making a scientific study of it. They argue Plato created an idealized society, rather than report a historical account, for the historians “know” there was no such civilization in existence in 10,000 BC. It simply cannot be. What they fail to report, is that Plato wrote about Atlantis in a book solely devoted to history, and that when skeptics in his own time went to Egypt to discredit him, they instead returned with verification that Egyptian columns indeed contained the story of Atlantis, as Plato had reported. It shows, at the very least, that the ancient Egyptians believed in a lost civilization of Atlantis. There is even evidence that signs of civilization – tools, objects and legends – are tens of thousands, even millions of years old. The American author Michael Cremo catalogued hundreds of examples in a book he titled Forbidden Archaeology, as it was his conclusion that such objects were deemed to be a no go-zone by archaeologists, as it would upset everything we assume to be true about our history. Such a paradigm shift occurred in the 19th century, when Heinrich Schliemann showed that Troy was not just a fable invented by the ancient Greeks, but a veritable city. The myths had proven to be true! There is good evidence that many of the reports of lost civilizations have always had a foundation in truth and reality. For many centuries, chroniclers doubted the existence of civilizations in the depths of the Amazon Rainforest. But today, science is admitting its errors and acknowledges satellite imagery has revealed the traces of this lost civilization. Other claims of lost civilizations, like Mu, remain outside of the reach of both archaeologists and explorers, but that doesn’t mean they didn’t exist! As the saying goes: the absence of available evidence doesn’t mean it is evidence of its absence! But apart from slowly rediscovering lost civilizations, new dimensions of known civilizations are discovered on an almost daily basis. Yet each time the boundaries of civilization are pushed back or expanded, the messengers of this new information are attacked. When the enigmatic Antikythera Device was discovered off the coasts of Greece in 1900, it took many decades before it was recognized as an astronomical clock – a device that was able to graphically show the position of the sun, moon, planets and certain stars. Dating to Ancient Greece, it is now heralded as the world’s first computer, but most of the research into the device has been done by “rebel archaeologists”, who were often ferociously attacked by their colleagues for even considering this might be what it eventually turned out to be. Most recently, this antagonism to expanding the scope of ancient civilizations has been most apparent in the controversy surrounding the so-called “Bosnian Pyramids”. The pyramid complex outside the town of Visoko, near the Bosnian capital of Sarajevo, would “merely” show that a civilization known as “Old Europe”, which blossomed between ca. 5500-3000 BC, built pyramids. As Old Europe was in any other way on par with the Sumerian and Egyptian civilization, why it would therefore not be able to build pyramids, is strange. But “Science” ferociously tries to maintain the existing paradigm, even threatening archaeologists not to partake in the excavations, as otherwise they will never work at other archaeological sites ever again! Our history is far more interesting, far older and more impressive than the standard text and history books. Known civilizations, such as the Greek, had objects that were able to visualize the orbits of the sun, the moon and the planets. Known archaeological discoveries, like Jericho and Gobekli Tepe, show civilization is many thousands of years older than thought. Adding lost civilizations like Atlantis to this new image, is merely another chapter in the story of civilization. In the New World, too, it has become clear that what the Spanish Conquistadors found, is far more complex and far more developed, than we give the early inhabitants of America credit for. It is definitely clear that our civilization is not the first!

Seeking Clarity? Ask about whatever you want with our Free Rune Readings!

Search Eye of The Psychic

Moon is traveling through Sagittarius today. The grass looks greener on the other side during this time. Jump ship. Learn a new language. Tell it like it is. Make people laugh.